Author’s Note: I’m still technically on my break, but it was important for me to at least write this piece today

My full Architectural side is bound to come out from time to time. With that being said, today serves as a great reflection of the career path I’ve chosen and the field of work that I’m so absolutely passionate about and love.

It’s hard to believe that today marks a full year since we lost one of the most influential Architect’s of this generation. She wasn’t just influential in terms of design; but as a woman holding her own in a very much still male-dominated profession. I looked up to her because of her avant garde way of thinking of architecture: the active use of emerging technologies, parametric design strategies and the use of the curve to create such eye-stimulating architecture.

There are several things I want to talk about in this post, and I’ll designate them as such, as I go. I’d like to appologize in advance for any archi-speak (architecture jargon) that may arise from this post that could possibly fly over anyone’s head.

The Architect & The Woman

Zaha is often hailed as the “Queen of the Curve” due to her expressive use of curves in her designs. When she won the Pritzker prize one of the jury member’s had this to say about Zaha:

At the same time as her theoretical and academic work, as a practicing architect, Zaha Hadid has been unswerving in her commitment to modernism. Always inventive, she’s moved away from existing typology, from high tech, and has shifted the geometry of buildings
– Lord Rothschild

She wasn’t acknowledged right off the bat. Her career mostly focused on her lectures and her colorful and radical early designs that she presented as paintings. Her work was featured and published in many architectural journals and mostly remain unbuilt.

However, despite that, Zaha has a full body of work that has spanned from 1991 – present. Before she had died she still has a number of projects that she had a hand it that are still under construction. Zaha’s work is all over the world. A few of her works include: the aquatic center of the 2012  London Olympics, Guangzhou Opera House in China and the Heydar Aliyev Center in Baku, Azerbaijan.

“I think about architecture all the time. That’s the problem. But I’ve always been like that. I dream it sometimes.” – Zaha Hadid

The above quote is one that has resonated with me a lot. Mostly because if you know me and have spoken to me quite extensively I can get pretty geeky, obsessive, passionate about Architecture. I think about things architecturally and that’s just something that comes hand in hand when you love this field. My strengths in architecture rely on analysis, research, theory and history. If you present me an idea or a project I’d probably be able to direct you to a theory or a project that flows along the same idea or path.  During the summer I’m a teaching assistant at a local community college for an architectural model making class and in the fall I teach a Digital Tools class to help students put together portfolios for college applications. Whenever a student shows me their rough sketch model of put together objects or even a simple drawing, my first instinct as I start critiquing their work is to pull out my phone and start showing them architect’s that have a similar aesthetic or similar design concept to what they have in mind, at least they can understand what that architect attempted to do and use that as a basis for understanding with what they’re trying to convey with their building.

I love finding the links between architectural styles and architects. The commonalities of thinking that each of us possess as there are no longer “original” ideas when it comes to architecture. Now it’s about taking those ideas and expanding them, and those possibilities can be infinite. One’s interpretation of a specific theory or idea always leads to you down several paths, and you can see that in any architecture student’s thesis project. My thesis was looking at the “hard edge” of a building, or a corner. Buildings are defined by lines and hard edges, 90 degree corners. What I aimed to do was to create architecture that wasn’t so definitive in those terms. Ethereal architecture, a building without edges, sounds crazy right? You’d be surprised by the amount of case studies I’d gone through that explored that idea! Or another beloved topic of mine that I love to talk research and read up on is masculine and feminine characteristics expressed in architecture whether that be through material or actual building design

By the way, if your’e every interested in knowing more about my thesis or anything else of my architectural world I’d be more than happy to tell you, or if you guys like I could post more about it!  Just let me know in the comments below!

The State of Women in Architecture

While I reflect on what Zaha has done for the profession in advancing design; I couldn’t help but remember the negativity that is also attached to her name. I remember in school, we would often talk about how she was overrated with her designs. We also had the tendency to talk badly about her personality, that she was somehow “bitchy” because of her overwhelmingly strong headed personality. But when I think about these things, something hit me like a ton of bricks. Why are women in this profession so bent on tearing one another down versus helping each other out? I’m not saying ALL women are like this, but there’s fair amount of them, based on my experience.

Would they call me a diva if I were a guy? – Zaha Hadid

Zaha poses a great point in this quote. Just because she’s a strong independent woman she’s considered a Diva or a bitch. But if you were to attribute that to a male? There would be no name-calling. I often feel like femininity is often called into question when you’re in a male dominated profession. A lack of feminitity could label you as butch or even question your sexual orientation and that could actually possibly help you because then you’d be like one of the guys right? But what if you like to express your femininity whether it be make-up, fashion, hair, I feel that if you’re worried about your looks, they won’t take you seriously. A 2016 survey had this to report:

“Nearly three-quarters (72 per cent) of women worldwide say they have experienced sexual discrimination, harassment or victimisation during their career in architecture” 1

These thoughts instigated me to talk to my partner in crime/future business partner about the topic and had quite the animated discussion about what it means to be a woman in this field. The discussion brought me to express my discontent of the seemingly lack of unity I’ve felt from fellow women while I was a student in this school. While at school, I had the privilege of having some pretty kick ass women professors that I admire. But, there were a handful of women teachers that frustrate the heck out of me when I think about them still. They were unapporachable and unwilling to really talk to majority of the female students.

Women are always told, ‘You’re not going to make it, its too difficult, you can’t do that, don’t enter this competition, you’ll never win it,’ – they need confidence in themselves and people around them to help them to get on. – Zaha Hadid

I’m not saying that they should give us special treatement because we were women, but the fact that there was no support from them really infuriated me; they were more condescending than helpful. I feel that they as educators and as women that has already dealt with the hardships of the struggle that we already face in this field that they should be more empowering to their students.  But as my friend put it, “it’s because we were taught to fight for our positions in this field. We didn’t have the freedom of men who always get support in different positions. They think that by becoming mean that it’ll help other women stronger.” I get it, the tough love aspect, but I’m not asking for sympathy or to be treated special because of my sex. I had expected to find a mentor in these women; women I could look up to and ask for advice when faced with a situation but instead was met with women who were only out for themselves.

I used to not like being called a ‘woman architect.’ I’m an architect, not just a woman architect. The guys used to tap me on the head and say ‘you’re OK for a girl.’ But I see an incredible amount of need from other women for reassurance that it can be done, so I don’t mind anymore. – Zaha Hadid

The same study shows that worldwide, more than one in five women would not recommend a career in architecture to other women.1 To be honest, I’m not entirely surprised. It’s hard to be a woman in this field. I can’t tell you how awkard it is to go on a site visit and be one of the only females there or what it’s like to sit in on meetings with consultants and be surrounded again by men. Part of you will always feel like they won’t take you seriously. It’s a daily struggle, but it’s something that won’t ever deter me from accomplishing my goals. 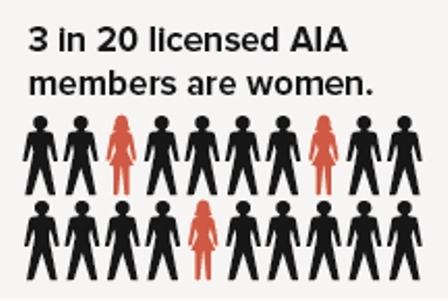 You would be surprised at the alarming amount of gender inequality that women are faced with in architecture. It’s an ongoing discussion and it’s hard to say if there will be any changes. Especially when a study a few years ago showed that there was a drop of women in the field. The above infographic depicts the that 3 of 20 licensed Architect are women. That’s such a low number. It’s not easy to be licensed, as someone that’s about to start her journey into the realm of licensure, it’s no easy task. A lot of the women at my office have gone through the testing and are so close to being done, and yet their not. Why you ask? Life happens; the ladies at work had to suspend that aspect of their career because they chose to have family and kids first. I applaud them for being able to balance work/life with the type of work that we do. But because they paused at that point, it’s been hard for them to get back on track to accomplish the one thing we’re all striving for: our license and stamp.

I may never reach starchitect status like Zaha, but I will fight for my place in this field. And as such a struggle as it is, I would always encourage women to follow and fight for the things they want; there are women out there that have the exact same goals as you. So if and when I become a licensed Architect and an educator, I will always strive to push my students and empower them the way I would’ve wanted to be.

Thanks for reading! Any comments? Questions? Let me know in the comments!

1. Results of the 2016 Women in Architecture Survey revealed