Hi everyone! Gosh, it’s been quite a few weeks since I’ve been posting regularly. I’ve been in a bit of a lazy mode, and have been taking time off due to the holidays. Work gave us about 11 days off so I spent a lot of time reading fanfics and watching anime, but mostly in fanfic world.

Anyways, this week I’m leaving you with the opening of a BL anime that aired over the summer. It’s one of the ones I’m trying to catch up on. And what I’ve really enjoyed this is that unlike a lot of BL anime’s I’ve seen that have the protagonist being coerced into feeling a certain way. The MC of this show has always looked up to and admired his crush for helping him straighten out his life. But those are my first impressions so far, I’ll update with a full review at some point.  END_OF_DOCUMENT_TOKEN_TO_BE_REPLACED

Hello my dear readers! It’s been a really long time since I’ve done one of these! It’s also amazing, that I’ve been using a prompt for this that should’ve ended back in July! I’m now one week away from completing the prompt. I’ll repost it when I’ve finished it as a refresher. But anyways,  another Monday has come and this week is a follow up to my last MCM’s post which was also a Boys Love theme featuring Doumeki & Yashiro. This time I’m featuring my favorite OTP (one true pairing) above all other non-canon ‘ships. I say non-canon because Free! is not a BL, although it can be interpreted as such by the fandom.

If you’ve been following me for quite some time, you’ve probably noticed that I’ve only mentioned Free! a couple of times. But if you’ve spoken to me outside of the blog, then you know I’m a pretty diehard fan of the series, especially for Makoto, Haruka and Sousuke. There’s a reason as to why I haven’t been so forthcoming with my love for this series. Put simply, my reasons for loving Free! is an unpopular opinion. I love the relationship dynamics depicted between all the characters and the melodrama they experience. To be honest, it was Takuto’s post that bolstered my confidence in that it’s okay to have an unpopular opinion and I shouldn’t be ashamed of the things I love (granted Taku does love the same kinds of shows I do it appears – it’s nice to find a comrade!). Free! is known to be the kind of eye-candy fanservice geared towards women with the amount of abs and pretty boys that are flaunted. But, as pointed out by Annie on AniFeminist, this show also offers emotional fanservice, which is what was my main draw from the series; pretty boys and abs are a plus. And, just to add another positive view on the series from a male perspective I recommend reading Gespenst’s Free! – The AniTAY Review on AniTay’s site.

But don’t get me wrong, while I am an absolute fan of this series and will speak volumes of how much I love this series in a positive light, I get it, it’s a series that’s often poked and prodded at and made fun of. I see where those views come from, and I can laugh about it with you, I’m not so blinded by my love for Free! that I’ll overlook how ridiculously silly the premise can be, or roll my eyes at how cheesy some scenes are. But some of those super cheesy scenes are exactly why I love this show so much!

END_OF_DOCUMENT_TOKEN_TO_BE_REPLACED

Welcome to Day 5 of the KnB Challenge!

Ah, the topic of the OTP (One True Pairing). It’s come up. Granted, I’ll admit there was a time where I was never really one to pair characters together in any kind of manner, let alone a romantic one with two boys. Then I watched watched Haikyuu!! and was introduced to the world of doujin’s via Kageyama and Hinata and from there I succumbed to ‘shipping characters left and right on most of the anime’s I watched. I say most, because sometimes I find ‘shipping inappropriate for certain shows (i.e. AoT and My Hero Academia)

So after this side was awakened, I started looking at character’s through a different lens. LOL. That being said, when it came to ‘ships in KnB I’m a bit torn because well, in my mind there’s two OTP’s here. The main storyline OTP that just works and I believe in that pairing too and then there’s my personal OTP. But as the prompt says, I should be focusing on my OTP. END_OF_DOCUMENT_TOKEN_TO_BE_REPLACED

Sooo, this was bound to happen– My first legitimate BL post. This time I’m not just featuring a character, but the couple themselves. I’m still a semi-novice to the BL scene, and I still have a lot to learn about the different kinds out there. While there is the cute and fluffy type love (Shounen AI) there’s also the more sex-driven side (Yaoi). I actually enjoy the broad spectrum that BL has to offer, and have recognized the pro’s and con’s of this genre. While a lot of it can be disturbing (with the themes and tones of violence and rape) there’s also the feel good kinds of love. 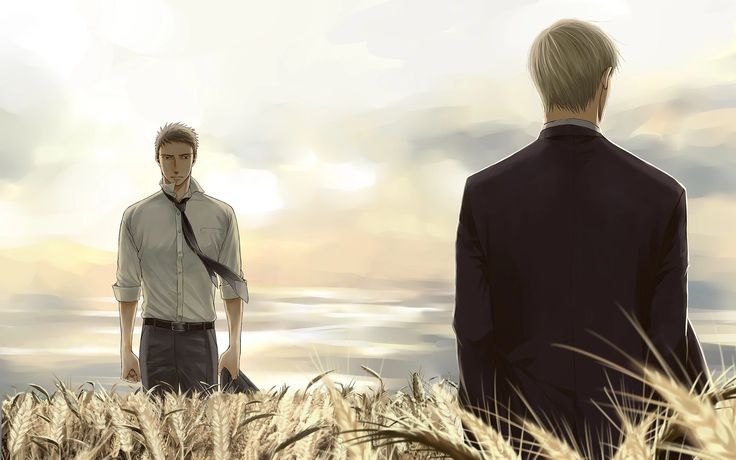 I had intended this to be a list of my favorite canon couples; but decided, I really just want to write about my favorite couple: Yashiro & Doumeki. I think most people I talk to daily (Naja and Mel) would confirm that I’m utterly obsessed with this one. Saezuru Tori Wa Habatakanai, also known as Twittering Birds Never Fly is a Boys Love manga from Koneda You. It’s also one of the manga’s I own physical copies of and I’m so obsessed that I’ve read these multiple times over and over trying to glean more into the complicated relationship that is evolving between the duo. The manga follows Yashiro, a member of the Yakuza, and is very much a promiscuous masochist, and his subordinate Doumeki, an impotent ex-cop that landed in the Yakuza because he needed a job and also because of an ulterior motive: Yashiro. These two are incompatible, but it works! So, what makes me a fan of this particular pair?