It’s no secret that I’m a Free! fanatic. So it should be no surprise that when Free! Take Your Marks announced it’s North American release that I was probably one of the first in line waiting for theaters to be announced. And boy, did I luck out. The theater they decided to show it at was one exit off the freeway from where my office is (about like 5 minutes). 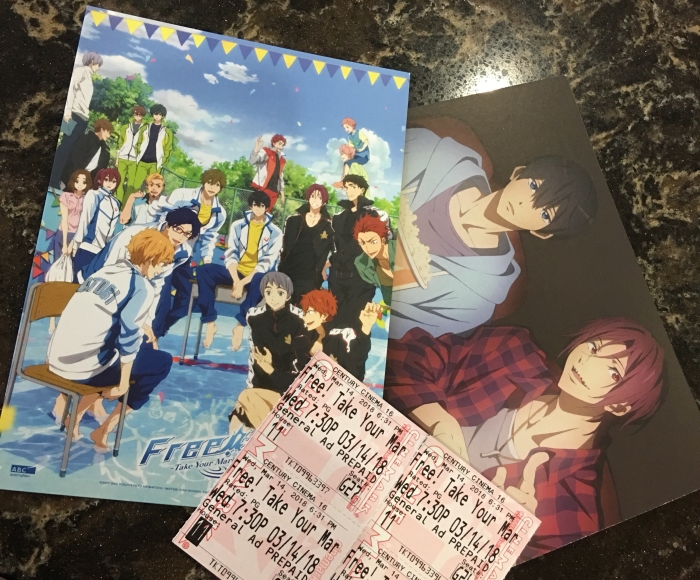 Now before I start to discuss/review the film, I’m just gonna keep it real with you. Not only was I counting down the days till the release (you probably saw my twitter feed) I was hyping myself up at work…

The day of the release I could hardly contain my excitement. Trying to be productive at work, I somehow managed to accomplish tasks by listening to Ever Blue and Clear Blue Departure while smiling like a total dork, and then getting really emotional/teary-eyed listening to Sousuke’s character song Just Wanna Know. That guy is…..just… so misunderstood, I can’t even begin to express my affinity for Sousuke Yamazaki.

But I digress, let’s get to the film.

Free! Take Your Marks consists of 4 “episodes” that takes place pretty much after Season 2 as the boys get ready to take on the next chapter of their lives:

I won’t go into the specifics of each of these episodes (avoiding spoilers, and for the life of me I can go on and on about these), but they were all inter-related to one another. There probably could’ve been a better way to transition the 4 together than a semi-abrupt ending and a blank screen that seemed to linger longer than necessary. But that’s my only gripe about the movie.

Surprisingly, the content was vastly different to what we’ve seen in Season 1 and Season 2. It was a long cry from the angst and melodrama we’ve grown accustomed to. While there were some tiny bits of angst, they were few and far between, and not drawn out longer than necessary. Granted some of those moments formed around Sousuke, but that’s understandable; we’re not sure what his future holds. He’s on the precipice of choosing between giving up swimming completely or considering rehabilitation in order for him to swim again. I hope Season 3 resolves what Sousuke decides to do. He deserves the world and more. There’s also a scene of Haru and Rin that was melodramatic, BUT it was done in a campy humorous way; definitely not meant to be taken seriously.

Ugh, seriously guys. All the boys were present in this one. Makoto and Haru’s previous relay teammates Asahi and Ikuya from Middle School and their beloved senpai’s Natsuya and Nao from High Speed were all present in some shape or form. Okay, so here…at least give me this section to fangirl about all the boys! Please, please, please? It’s up to you if you wanna read about it, I’m still gonna do it. It’s my blog after all. 😛

Asahi shows up in the Light Novel High Speed, and in the movie Starting Days. He’s a rambunctious kid – the type to annoy you. He struggled with the feeling of inadequacy when he saw Haru swim in Starting Days, but with the help of a certain megane he crossed paths with that encouraged him to try “mental training” he was able to get over his slump. Years, later we see him roaming his hometown calling up his friend looking much much more mature. He’s still the same old energetic, loud kid with a bright personality, but from that scrawny kid in middle school, he sure grew up to be one of the pretty boys, puberty did him justice. 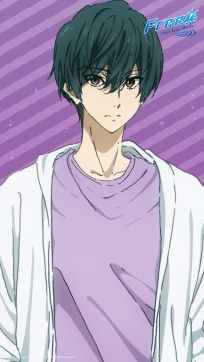 But, what I really loved about their appearances was exactly HOW they interwove all of their stories and timelines to coincide with the present. Firmly depicting this idea of “bonds” that connect them in their brotherhood that is swimming together. Their paths have crossed one another before and will continue to cross until they reach their goal: to see and swim together again. Fate led them to swim together to begin with, and fate will re-unite them. I know, it sounds cheesy, but that’s what Free! is all about, the depiction of friendships, how deeply these characters have connected and bonded together through swimming. The movie in a nutshell nicely sets up Season 3.

I decided to lump these two together just because their screentime was barely there in comparison to Ikuya and Asahi. The senpai’s of high speed are shown to still be in the swimming world, and actually I believe Makoto will probably run into Nao and some point. The way they tied Nao back into the fold was a bit of a stretch, because: cosmic intervention and destiny, but hey I’ll take it! As for Natsuya, he had a bit of a melodramatic scene, who vents their frustrations to a stranger buying a drink at the vending machine? Also, how he appears was another cosmic intervention; he just happened to be there at the right time with the right people.

But I love how they were able to somehow tie these two dorks back in. Like I said earlier, I’ll buy into the whole ‘fate’ and ‘destiny’ thing just because at the core of Free! I find that there’s something whimsical about their outlook on the future. Yes, fate plays a huge role in this series. It was fate that Haru, Nagisa and Makoto met Rin again. It was fate that Asahi met Rei at the bookstore in middle school. It was fate that Makoto found his calling to coaching so haphazardly.

Bottom line is that this movie was full of fluffy happiness and tons and tons of laughter.  I mean, I don’t think I’ve ever seen EVERYONE smile like that for long periods of time. Lots of “aww” moments, the ‘ships were there, but they didn’t dominate or overwhelm the story that was being told. Their growth of angsty middle schoolers and teens is slowly ebbing away.

But that leaves the question. Is this the new phase of the boys? Will we see them grow confident as they pursue the next stage of their lives? Will we see the trials and tribulations of them trying to reach their dreams, and the angst that brings on? That would be more relatable than the angst they felt about their bonds with one another. I’m excited to see what Season 3 holds, and guys. I hope you’re ready, because I’ll be talking about Free! more this coming summer and obviously when the new season begins.

10 thoughts on “[Take Your Marks!] The Starting Line of a New Future”