(author’s note: yes I know this is like super super months behind, but I finally finished it!)

This year, Crunchyroll hosted their very first Crunchyroll Expo (CRX) the weekend of August 25, 2017.. I bought the weekend pass the day of my birthday, as it was the cutoff date for them to mail passes to attendees. That alone was one of the main reasons I ended up checking it out. I didn’t have to do the whole line-con thing just to get a badge. The only other convention I’ve had the chance to go to is Fanime both in 2016 and 2017. I got a weekend pass; but ended up attending 2 of the three days. I was just too exhausted by Saturday night, so I skipped the last day.

Overall, I thought the expo was a success for its first event. The mailing of the passes was a great draw. But what I found to be really nifty and handy was the use of the guidebook app, that you could download on Apple’s App Store, Android, or even Google Play. At first I thought it was solely created for CRX, but realized that it’s a standalone app in which you can check into events and then pull information for that.  The guidebook allowed me view the schedule and the maps efficiently. If I clicked on a panel, it would show me where it was on the map. However, it didn’t have a “you are here” aspect to show my location in relation to where I’m going.  It also allowed me to create my own schedule by picking the panels I wanted. It let me know if there was a conflict in schedule if I chose multiple ones at the same time, and kindly reminded me 15 min. before any panel started was about to start. The app made my Con experience really enjoyable and allowed me to plan accordingly.  The compactness of the space also allowed easy maneuverability from one space to another in comparison to the treks between panels at Fanime.

Exhibitors’ Hall & Artist Alley. There was  very small amount of Vendors inside Exhibitors hall, but that’s to be expected – it is their first expo! I saw a few familiar faces there that I usually would see at Fanime. 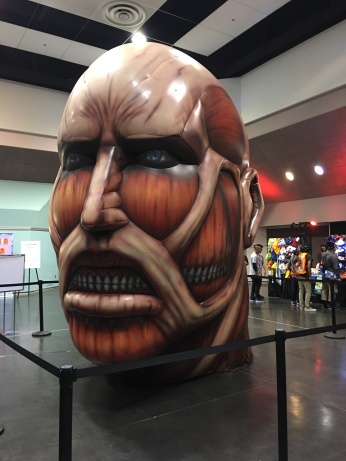 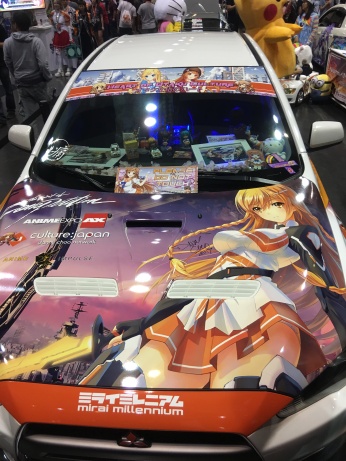 There was a huge Attack on Titan head on display as well as a few cars that were decked out. I paid special attention to one particular car, because well it had Danny Choo written all over it. Danny Choo is the son of famous shoe designer Jimmy Choo. I’ve been following Danny for awhile because of his “smartdoll” line; ever since I got into Toy Photography I’ve always admired his version of the Ball Jointed Doll, and to be honest I’m currently saving to purchase one of these bad boys.

My only critique of these two spaces is the actual physical space. there were a few rows inside artist alley were way too tight for comfort (see below about ventilation). While exhibitor’s hall was massive, the actual space given per vendor wasn’t exactly a lot compared to like say, Crunchyroll’s own space for their booths.

But, there were some drawbacks to the Expo. Personally it was more about the amenities than the Expo itself. I get it, it’s the first go around with an Expo, and they probably weren’t sure what kind of gathering would appear. But the ventilation system there was really bad. Circulation spaces (hallways, lobby, artist alley) were just so humid and stuffy (okay maybe that’s more of my architect side kicking in). The only places I could find respite were in a few of the rooms in which panels were held, and Main Stage. Luckily main stage had massive amounts of seating for anyone that just needed to sit down and take a breather. Another downside was the lack of food choices. There weren’t many choices nearby for quick bites to eat. Food at the venue was average if not a little pricey. Also, I had heard that even though there was an area designated for food trucks; the turnout was rather disappointing.

One thing that could definitely be improved upon was cosplay gatherings. I wish there had been a schedule for cosplay fandom’s to get together and take photos – structured like San Jose’s Fanime’s idea on the gathering. However, I found that this Expo was much more panel focused than the cosplay’s and while I enjoyed that, I would’ve loved to snap photos of gatherings.

As stated, the panels I attended were really good ones, and I guess I’ll break down what I took away from them followed by some helpful links!

This one of the panels I was really looking forward to CRX started rolling out their special guest list. I got into this game on a whim and also because I’m easily swayed by my otome queen, Naja. It was really neat getting to know the creators of the game, how they got inspired to create such a game, and how at times this game was touching on an emotional level. You can find Dream Daddy on Steam. Essentially, the crew behind it loves visual novels and otome type games. Leighton just thought a loud one day that it’d be nice if there was a game where you could be a dad that dated dads. She further went on into how the daughter in the game, Amanda, reflects her personal relationship with her own Father. She got to talking with Vernon about this idea of dating Dads while on a trip to California, and just so happened to be at Disneyland when they started to flesh out the types of Dad’s you can date, and that was the starting point. A handful of great connections landed them to actually get this game going, and to their surprise became an overnight hit! Among the creators and contributors that were on the panel, it was pretty clear that dad Damien was the favorite.

Being an Otaku: Collecting Without Breaking Your Wallet | Panel

Most of you readers know I’m quite obsessed with Nendoroids, but those closest to me know that I’ve recently started collecting a bunch of figures. I figured I should attend this one just because, collecting figures hasn’t been easy on my wallet, and honestly there were a lot of tips and tricks taught in this panel. I even bumped into the host walking around, and ended up snagging their phone number for whatever questions I have.

While the tips and tricks were really good, the process is not for the faint of heart, as it’s pretty damn time consuming and very much research based. If you’re interested, reach out to me! I’d be glad to share what I’ve learned!

My Hero Academia: After School Special with Special Guests | Panel

This was one of the bigger panels. Basically, they showed the latest episode (however, most of you probably saw that there was no new episode this past week), so we watched the episode that told the story of All for One and One for All. After the episode finished airing, the Voice Actors for the dubbed version of My Hero Academia came to the stage while the panel host’s directed a conversation with them. The two that came out were: Caitlin Glass (VA for Ashido-Acid Girl) and Monica Rial (VA for Asui-froppy). Monica ended up using froppy’s voice for majority of the panel.

One major takeaway from their discussion was that they really enjoyed the art style of the females, as they weren’t the thin waif-like types; they actually had some meat on them. My Hero Academia does well in regards to dealing with a positive body image, however, the discussion of Momo Yaoyorozu’s internship and how they were doing commercial’s instead of hero work. The argument that the women were being objectified came up, but then the idea that commercials are an extension to the role a hero plays in every day life came up as a counter.

Anime in Academia: An Introduction to Anime & Manga Studies | Panel 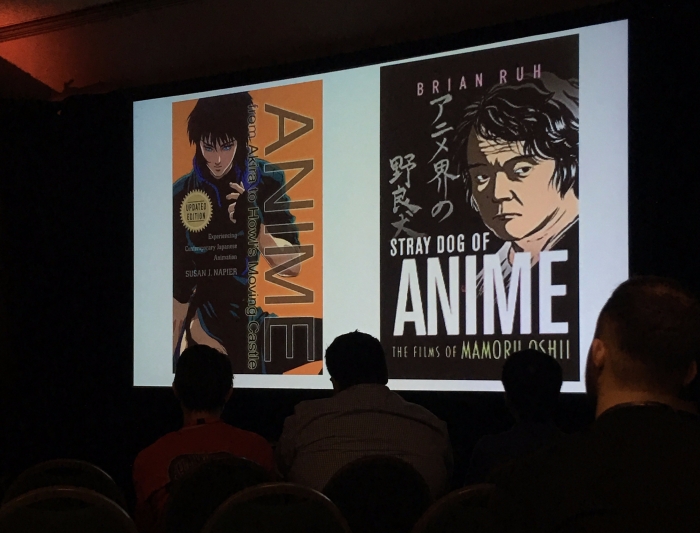 I went to this panel because I do want to look at Anime on an academic level, in terms of research and linking it back to my career, it’s been difficult to find good texts to start off with, and where to find good sources. This panel was a great introduction into what books serve as great introductions while also providing a list of websites that also cater to this realm of anime analysis.

These are just a few that were mentioned. Get in touch with me to discuss more in-depth if you’re interested!

As I sat in this panel, I thought it was just a feminist panel. I had ZERO clue that the creators of Anime Feminist were actually there in the flesh. I also found out the history behind this website, and that they’ve only been running for a little over a year. They talked about the role of feminism as discussion when it comes to anime, while also describing how to handle the dark side of social media when you become a public figure.

I think the title says it all. A panel of people sat and showed clips from anime’s of the cooking genre. One of the panelists was Emily Bushman, a writer for Crunchyroll and runs the blog Yum! Penguin Snacks, where she takes recipes from anime’s and re-creates them in her kitchen. She talked about her blog a bit, and then! they ended the panel with a trailer for Shokugeki no Soma: San no Sora. Who else is looking forward to more food wars? I know I am!

Johnny Weir: A Conversation with an Olympic Figure Skater and Yuri!! On ICE Fan | Panel

Ah, where are all my fellow Icer’s?! I honestly thought they’d compile some clips of YOI, for Johnny to talk about; however it really was just a conversation between the host and Johnny. Discussion on his career in parallel to that of YOI. His favorite characters, least favorite characters, who he related to, and what he’s looking forward to. He also discussed the animation aspect as well as the choreography of the show.

Did any of you guys make it out to the expo? I know I got to meet Shay, a fellow OWLS member! Even though it was really really brief, it was nice to finally meet her. We had missed meeting each other at Fanime earlier this year.

Was there anything in the post that caught your eye? Or anything that you wanted to know more about? Let me know in the comments below! 🙂