Happy Monday everyone! It’s time for yet another Man Crush Monday. This week’s MCM is a bit different as I was tagged by one of my closest blogger-friends Mel 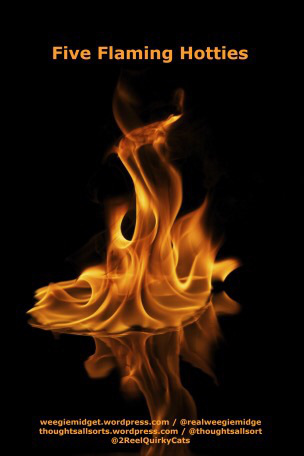 I tried to keep this post in-line with Mel’s using specific categories, so that I didn’t really repeat myself because my usual favorites would be so easy to name: Vash, Makoto and Kageyama.

So let’s meet a few new faces that I’m currently fangirling for!

Kyoya hails from the very classic, very funny, ahead of it’s time anime Ouran High School Host Club. He’s the master planner, and the collective brain of the host club. My favorite episode of the series is when the episode focused on him and ended with him painting outside the picture frame after befriending Tamaki. The idea of people touching our lives that can push us to be more than who we are currently is amazing and a very true sentiment. I’ve met a lot of people that continue to encourage me the way that Tamaki did Kyoya 🙂

Barakamon is one of my top 10 favorite animes. It’s a really good mix of comedy and being a heartwarming slice of life. There was that one episode where Handa was staring at a blank white canvas and he hesitated to do anything with us because well, he wanted whatever to come out to be perfect. I can totally relate that. I struggle with that first page of a brand new notebook because I want whatever comes out to be perfectly written or drawn out. Handa is a bit socially awkward (as showcased in the manga and anime: Handa-kun) but again, those are some of his endearing traits.

Somaaaa, okay, I absolutely love Food Wars.  Some people can’t get past the excessive service of Season 1, but I managed to survive that and am enjoying the show for what it has to offer. I love Soma’s tenacity and his strive to being even better than he already is. He’s really quick on his feet. He’s constantly learning and evolving and he doesn’t take his losses to heart. This is definitely something I need to do myself in light of my failed exams.

I don’t talk much about the manga I read on the blog, and that will start to change slowly but surely, so I just wanted to share this cutie Miyamura with him. He’s one of the leads in the manga Horimiya, which I really love. It’s a romance set in highschool, but it’s got a different spin on it. It’s not super heavy on the drama, but a slow building of a relationship between two people. Miyamura is a shy boy and a bit of a loner whose appearance changes outside of school. He’s riddled with tattoo’s and piercings despite his plain looking appearance in his school uniform.

Maki is my latest sports anime obsession, Yowamushi Pedal. I have to say his riding style really threw me for a loop the first time I saw it, but he’s the definition of cool. Also, he has some pretty fabulous hair if you ask me. I was really sad at the end of Season 2 because well, he’s a third year in the anime, that mean’s he’s graduating. And one of the movies leading to the third season was about him and his influence on Onoda, the main character.

Also, I would tag people, but I’m sure everyone I know has had done this already! So I will have to skip that part.

If I missed your Top 5, send me your link so I can see what you guys wrote! 😀