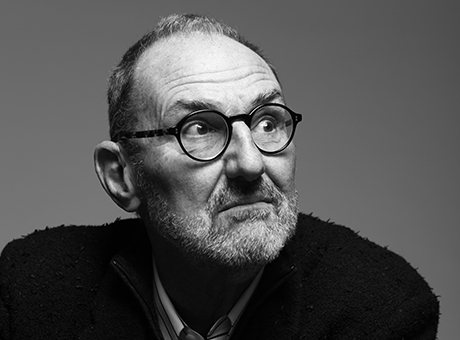 Thom Mayne, of the firm Morphosis, is one of the Architect’s that is a key component in the what Architecture has become in the modern era. He is what we would call a “starchitect”, a famous Architect that’s recognized outside of the realm of Architecture. Basically on the same level as a Hollywood celebrity. There are very few “starchitects” who have a heavy influence and presence in the scene.

Interview With Thom Mayne: “I Am a Pragmatic Idealist”

Thom Mayne has always been one of the many Architect’s that have been influential in my career.  Him and another Architect, Wolf Prix.

Now, my personal work and my own design aesthetics actually don’t mirror that of Thom and Wolf. My personal design aesthetic is much more clean and simple I think. But I haven’t quite found my “voice” when it comes to my design. Thom mentioned it briefly in the linked interview, but it took him awhile to find his voice because he was following in the shadow of other prominent Architects. But once he found a way to participate in the discourse in his own way, he became more confident.

Will I ever find my voice? I’m not sure, since I haven’t fully thought about it. But it’s something for me to consider, at least I can pursue my voice in creating fun projects on the side, it’s just a matter of me making the time and effort. I think I have an idea, but getting it on paper has always been a struggle. There’s something about staring at blank white paper that just causes the perfectionist in me to seize up in anticipation that the first stroke on the sheet must be absolutely perfect. Have you guys seen Barakamon? There’s an episode where Handa Sei experiences just that, and Naru completely destroys the white space and he has no choice but to dive in.

What I love about Thom Mayne’s work is that sometimes it’s so surreal and the same can be said about Wolf Prix. They challenge design aesthetics of “the box”. Which is also another obsession of mine. A lot of projects that stand out to me are about him breaking the box, literally. Cooper Union, New York has always been one of those buildings that just spoke to me. I actually got to visit it and see inside of it for a field trip, and it was really stunning. I like the fluidity of the structure on the inside, but the rough aggressive breaking of the exterior. It’s a great juxtaposition.

In the link above, there were a few quotes of Thom that stood out to me, so I wanted to talk about one particular quote that aligns with my views:

“Architecture is an investigation of a multiplicity of forces. We produce spaces that accommodate and enhance human activities.”

While we do accommodate and enhance human activities for comfort and efficiency, I also like to look at the effects it has on the person on a more emotional and psychological level. I believe that architecture can evoke emotions out of it’s occupants as well as affect an individuals mood. Now, why do I believe this? The answer comes from experience. My belief came from one fleeting moment in my childhood. All it took was a field trip to Grace Cathedral in San Francisco that left me awe-inspired and completely enamored with architecture.

Imagine being a child walking up to a massive gothic-style cathedral. The heaviness of the building and the height was already overwhelming for my 9 year-old self to comprehend. But then you cross through those massive doors into the church. I remember my jaw dropping once I crossed that threshold. I was enraptured by the interior. The differences between outside and inside were such contrasts to me. It was a bright sunny day, yet on the inside you were surrounded by darkness with the warm light of the exterior filtering in through the colored stained glass occupying the floor with a myriad of colors. The columns that turned into vaulted arches that supported the building seemed to extend forever. That view and that feeling was burned into me, I couldn’t shake it. I was completely hooked on architecture.

Due to the amount of information we process, a lot of people marvel at the fact that Architect’s brains are a little different because we retain so much, but also balk at how socially inept some of us can be. Sometimes our archi-speak takes us off in a direction that makes us look pompous, but I assure you, that’s not our intent (well for most of us that is).

Thom Mayne’s body of work has always been inspiration to me. Although, his style has evolved over the years, they are buildings that make a statement in the neighborhoods they belong to.  Cooper Union in New York is one of my favorites, and I actually lived next to the CalTrans Building while I lived in downtown Los Angeles. I’ve also been able to see the San Francisco Federal Building that his firm has also designed. While Cooper Union is a private institution, the other two are civic buildings. All buildings have a lot of movement, and his buildings somehow speak to that movement. 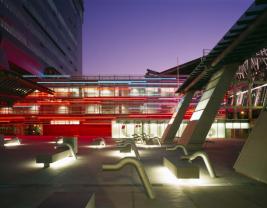 For instance, the paneling system on the CalTrans building are reminiscent of the lights on cars moving t a high speed creating streaks of light.

Cooper Union’s exterior looks like it’s breaking apart from it’s center, like a body of still water that has been disrupted causing a ripple effect.

So I agree with Thom in that Architecture is an investigation of a multiplicity of forces. It wasn’t just the architecture that made me feel that way, but the interplay of different factors. There are not many professions that allow for cross-discipline studies, Architecture is the umbrella in which everything is taken into a whole. We look at a building from all kinds of angles: structural, environmental, culturally just to name a few. Architecture stands for more than just a building, but it becomes a symbol for a community.

That ends this week’s Archi-Anime Anecdote! I hope you guys enjoyed learning more about my interests as well as a little bit about my favorite: Thom Mayne.