Greetings and welcome back to Fantasy Friday! As you saw last week, I’m trying to revive this series and have a bit more fun with it. So I figured, what better way than to kick it off with one of the more crazier pieces of architecture that I’ve seen so far, and that comes from the anime Nanbaka.

If you have no idea what Nanbaka is: 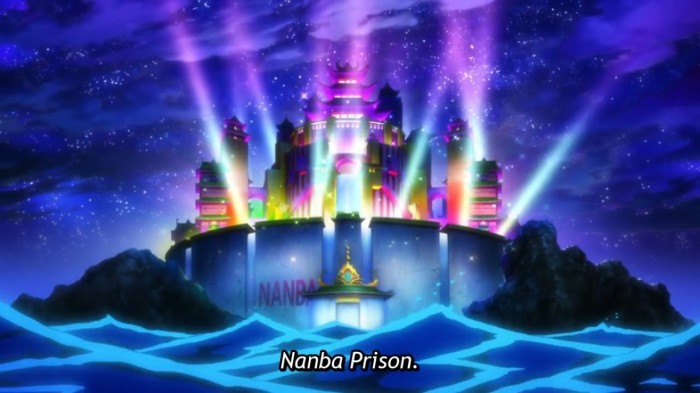 The name of this prison that houses all the inmates is Nanba Prision, and it’s located off the coast of Japan.  It’s supposed to rival the security of Alcatraz. The prison is highly rated due to it’s security as it’s virtually inescapable (except for one person).

There are 13 buildings that create this massive complex, and there was actually an episode that helped lay that out. It’s also relatively big enough that it has it’s own tram system to get prison guards around easily. Needless to say, the Japanese temple motif is used quite heavily in all the the architecture represented in this particular anime. I couldn’t extract any particular reason for them to rely so heavily on using this style except to poke fun at the traditional architecture by using all kinds of crazy colors and also exaggerating the size and details or ornamentation on each of them.

Images of the interior are few and far in between, but I was able to snag a few screenshots of the warden’s office, hidden interior garden, and their coliseum. 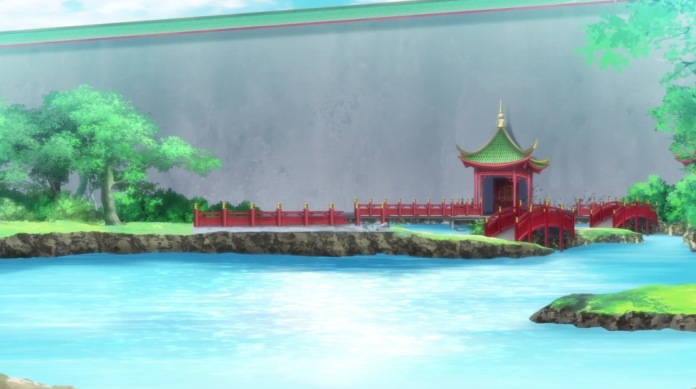 Nanbaka is full of color: whether it be in their architecture or in their character design.  It’s just got such wildly exaggerated aesthetics that I can’t help but love what an absolute mess it is.

Hope you guys enjoyed the revival post of the series! What do you think of the architecture of Nanbaka? Let me know your thoughts in the comments below! 🙂

7 thoughts on “The Wild Architecture of Nanbaka”