note:  We’re in the final stretch of Kids on the Slope!! HUGE thank you to weekendotaku has been helping me a great deal by participating and creating these banners, and thank you to everyone that’s been keeping up with the series!

Another Christmas has come and gone and a lot has happened within that year. Ri-chan has finally realized her feelings for Kaoru and is hesitant to act. After Sen confronts her and apologizes for not seeing it sooner they reaffirm that in the end they are family and nothing more. Jun announces that he’s leaving for good and wants to leave Yurika behind, but can he really?

I really do like this anime, but the pacing of the episodes in terms of time is really throwing me off. Maybe I need to watch this all in one go to get a better feel for it. But literally a year as passed in a span of 3 episodes. When Kaoru mentions Sen’s birthday is around the corner and I’m thinking didn’t he just have one a few months ago? Not realizing that it was indeed Christmas time again.

I’m glad that Ri-chan has realized her feelings for Kaoru and has found the courage to try to do something about it versus letting her feelings linger for so long like they did with Sen. However, I have a bit of a problem with how Ri-chan addressed Sen when he was trying to confront her about her feelings. Was she still trying to protect her relationship with Sen by telling him he was misunderstanding the situation? Did she think it was a lost cause that didn’t need to be discussed since she knew they would forever be like family to one another? She could’ve come clean and said she HAD felt that way, but she accepts that they’re nothing more than family to one another versus letting Sen believe that he was imagining things. 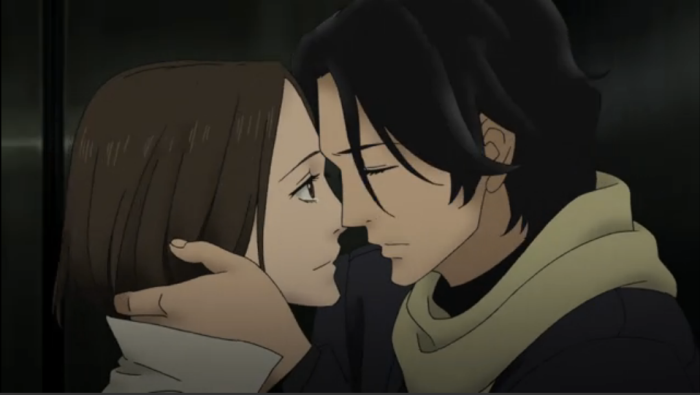 This episode was a bit of a jaw-dropper in terms of Jun and Yurika. As touching as the scene on the platform was, I wished that the development of this relationship had been explored a little more leading up to it. I didn’t expect Jun to cave in so easily at the idea of Yurika not being apart of his world anymore when he’d been somewhat cold to her all along.  Will we see more of these two in the next few episodes? Or will their story die here? I hope we see some kind of follow-up. This episode’s title is definitely an embodiment of that final scene. Love me or Leave me is what Yurika is conveying to Jun, and he does exactly what she wants: love her.

Music makes it’s way back into this episode when Sen and Jun duke it out. The song they use to challenge one another is “Four” by Miles Davis. It was definitely the highlight of this episode. The featured jazz pieces in all of he episodes have always been solid pieces of work throughout the series. I’ve actually picked up on listening to a bit more jazz while I work these days. I can definitely thank Kids on the Slope for that.