note: weekendotaku has been helping me a great deal by participating and helping me out with these banners. I’m forever grateful!

Sentaro is feeling love for the first time and Kaoru sees it as a chance for him to get closer to Ritsuko. He plans a group date for the four of them but; Sentaro complicates the situation, which puts Kaoru in a bit of a bind the rest of the episode. 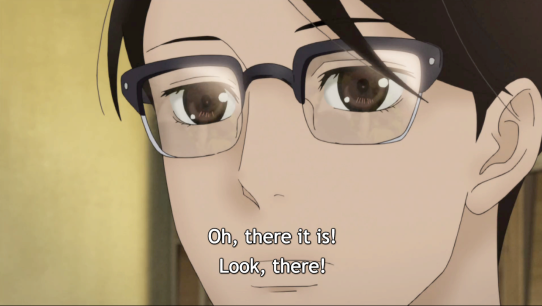 The first thing that I notice is Sentaro and his family. Sentaro is not as well off as Kaoru is judging by the appearance of his house. The shoji screens are ripped and the furniture is beyond well worn if not a bit beat up. On top of that Sentaro has a lot of siblings. I can’t help but notice the look on Kaoru’s face as he watches on, with a slight reflection of Sentaro and his siblings bouncing off his glasses. My initial thought is that Kaoru feels a sense of loneliness; he doesn’t have siblings, much less family he can really depend on and be close to the way Sentaro is with his own mom and siblings. Despite not having much the family is happy. The total opposite of Kaoru’s present state; who still somewhat struggles to find a place for himself on top of being able to express his true personality. I think Sentaro may very well embody the things that Kaoru wishes to project himself, but is still unsure if it’s okay to express himself the way that Sentaro does. 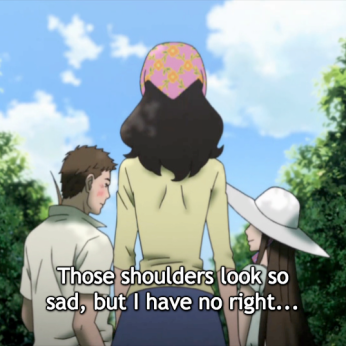 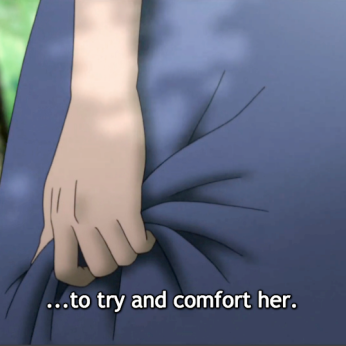 So that was an unexpected turn of events. I was under the impression Sentaro was being the protective older brother that might’ve been in love with Ritsuko, but gosh I can officially say that I got that totally wrong. Ritsuko may be the doting sister type to care for the unruly childhood friend. She’s never once had to confront those feelings since Sentaro has always been closed off to others and never let anyone in; until Kaoru came along. Despite her connection to Sentaro being threatened with Yurika she stows away her feelings and pretends that absolutely nothing is wrong. Although Kaoru notices this; he can’t help but feel guilty for having to put Ritsuko through all this because he was acting selfishly, even though he may have slightly knew that she felt something for someone; there was a bit of a hint in episode 2; Jun and Sentaro ascended the stairs of the basement and she watched the both of them leave, Kaoru wondered which of the two she was looking at. 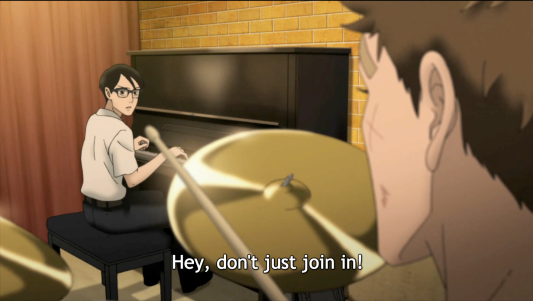 Can I just say I really loved the make-up duet between Kaoru and Sentaro after their spat over the handkerchief? These two already are so in sync with one another’s play style; my favorite part was when Kaoru started to play and told Sentaro “Don’t just join in!” and the latter just says “I wasn’t joining in anything.” Sometimes in order to make-up, words don’t need to be exchanged to get overcome differences. These two seem to do well communicating to one another through music, and I really enjoy that aspect. I really love seeing Kaoru have so much fun playing jazz when he’s usually so straight-laced outside of that basement. 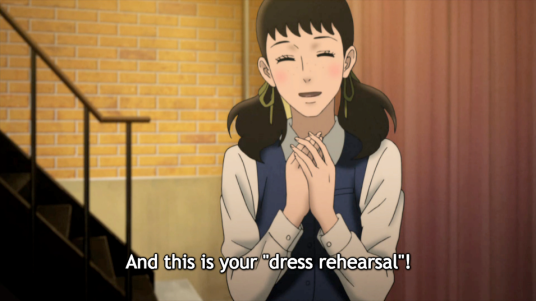 This episode featured a beautiful rendition of Bill Evans’ “Someday My Prince Will Come” by Kaoru. I was sitting there wishing and hoping that Ritsuko’s face would light up as she listened to it, but she was so stone-faced through it that I realized she was completely missing the point of Kaoru’s performace when she assumed that she was just playing the part of a stand-in. I didn’t expect him to be so forthright with his own feelings to her, he’s built up a ton of confidence these last few “weeks” it’s kind of intense!

By the way, I really don’t know what to think or say about that scene of Yurika and Sentaro in the art room. Is she painting Senataro half naked?

7 thoughts on “[Kids on the Slope]: Episode 3 | Someday My Prince Will Come”