With Kuroko no Basket: Last Game on the horizon, it made sense to feature one of the very few females that are in a male dominated anime. Why I didn’t feature her sooner is beyond me, but I’m glad I thought of her for this week!

Riko Aida, is one of two females that are regular characters on KnB. The two girls are exceptional females that can more than hold their own; but Riko stands out more for one simple reason: she’s the COACH of Seirin’s basketball team.  Let that sink in for a little; she’s a third year high school student, and she’s the COACH.

Needless to say, a lot of the coaches from other schools, who are typically older males; doubt her for the obvious reasons. It’s pretty apparent that because she’s a girl a lot of people doubt her coaching abilities. Also, adding insult to injury, how can she possibly be a good coach if she’s just a student? Passerby’s and spectators of Seirin’s games always get confused when they see her; they think she’s the club manager and are mindblown when they realize she’s the one coaching the team. Even the first years that tried out for Seirin’s basketball team assumed that she was the club manager, only to have their jaw drop as they’re proven wrong. 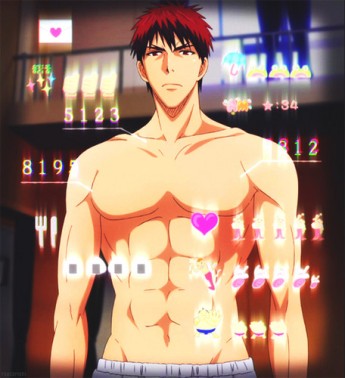 But what makes Aida a capable coach? How versed is she in the sport of basketball? To be honest, she has no experience with the sport. However, she is more than competent as a coach. She’s the daughter of a sports trainer, who was a former basketball player for the Japanese National Basketball Team. As she grew up, her frequent tag-a-longs with her dad to the fitness centers gave her enough training as she watched him train and develop these athletes. By shadowing her Father, and watching him intently, she gained the ability to “scan” players bodies and accurately determine the statistics of the player ranging from: height, weight, strength, speed, and agility. She can also see the faults and weaknesses of each player. It is shown in the manga and anime, that when she looks at a player (particularly when they’re shirtless) she’ll see running numbers tagged to specific muscles. With the information that she gathers from her ability, she is able to tailor specific training regimens based on what’s best per player. On top of that, due to her training under her Father, again, who is a sports trainer; she’s also quick to notice when a player is overexerting themselves as well as injuries and can tape up joints quickly and efficiently. She’s also known to run her regimens by her Dad if she feels stuck; he’s shown to fully support his daughter’s passion for being a sport and never once deters her from doing it. However, he does try to deter her from staying up to late planning workout regimens just because he’s worried for her beauty sleep.

What I love about her is that she doesn’t let her gender and sex get in the way of her coaching. Meaning, despite what people assume and how she’s viewed, she’s never once shown that it’s bothered her, and never has anyone on her team doubted her. If anything the team has nothing but respect for her because she clearly knows what she’s doing. She’s definitely depicted as a tomboy, often displaying a lack of femininity by being physical with her basketball team; often hitting them or putting them in wrestling holds (i.e. The Boston Crab) if they’re misbehaving. However, she is a girl through and through. She decides to grow out her hair when they enter the Winter Cup as a good luck charm. She also gets incredibly girly when Tetsu #2, the puppy makes his way onto the scene. Overall Aida Riko is a great female lead in this anime, and another inspirational female to add to list and is refreshing to watch in this male dominated show.

Have you seen KnB? What did you think of Riko? As always, thanks for tuning into this week’s WCW!