Hello ani-bloggers! Welcome to my stop on the February edition of the OWLS blog tour feature. OWLS: Otaku Warriors for Liberty and Self-Respect, is a group that hope to spread the important message of respect and kindness to every human being. Our monthly blog tours that reflect this message of tolerance and self-acceptance, through various analysis of the anime medium; although it is not limited to anime.

I joined OWLS mid-january, and as this is my FIRST OWLS blog tour since joining; I’m a bit nervous because this group has a lot of great writers!! This month we’re looking at Yuri!! On Ice and the topic of “flight”. You can click on the following names for their interpretations of our topic this month: Arria (fujinsei), Remy (The Lily Garden), Rai (Rai’s Anime Blog), Steph (twohappycats), Pink (Pinkys Palace), Kat (GrimmGirl), Venus (japanimetalks), Naja (Nice Job Breaking it, Hero), and Steph (animegirlsnyc).

“An individual takes flight when there is a goal, a dream, or an ambition that he or she wants to achieve. However, for this blog post, we are going to look at “flight” in different lenses: the underdog’s dream, the possibilities that Yuri on Ice allows viewers to think about, and also the dangers of greed and ignorance that can influence one’s dream.”

Yuri!! on Ice has taken the anime community by storm and it’s impact has been remarkable. It’s often made fun of for being “Yaoi on Ice,” or “Fujoshi Bait”, but it has affected the anime community nonetheless. It’s opened up the doors for the depiction of a LGBTQ relationships in the anime media. Yes, we have other branches: Shounen AI/BL/Yaoi, but those have always been in your face in terms of how they get you to grasp the relationship between two men. The depiction of the story between Viktor and Yuri is a natural progression and looks at love for love, not by gender or sex. It also focuses on the effect that love has on an individual, and many will argue it’s not necessarily romantic love. But it is a type of love, nonetheless. I will admit though, that the depiction of the relationship is not clear-cut; as the viewer often has to allude and make assumptions.  But, that doesn’t take away from the fact that the relationship between the two characters allows for the normalization of LGBTQ relationships.

Flight in Yuri!! on Ice

When I think of “flight” I immediately thought of Viktor Nikiforov; the other protagonist of the show, and Yuuri’s partner/coach. So why is flight associated with this individual?

Personally, it’s hard to look at Viktor subjectively, as he was my absolute favorite on this show, and not for fangirl reasons.  I’ve seen some people knock on Viktor’s character for being flat, and unchanging. But there’s so much to Viktor than what meets the eye. And when we were given the prompt of “flight” I immediately thought of Viktor and his storyline in Yuri!! on Ice. Viktor is a true inspiration and I think he embodies the motto that OWLS has set forth: Free to be me. I’ll be looking at “flight” through the character analysis of Viktor Nikiforov in his skating career and his personal life as well. To me, Viktor’s flight is the life-changing choices and the effects his leap of faith has on his life.

On the Precipice of Change

When the anime starts, we’re witnessing Viktor at the height of his career. Viktor is far and away a legend on the ice: five consecutive World Championships and five consecutive Grand Prix’s amongst a deluge of other European championships. At the age of 16 he was already at the top of the ice skating world, and was known to continually surprise both audience and the judges with his routines.

Off the ice, Viktor doesn’t have much of a personal life, as he’s dedicated everything he’s had to his love for ice skating and his career. In episode 10 he says:

“On the rare occasions I take time away from skating two ‘L’ words come to mind: life and love. I’ve spent the last 20 years neglecting both of them.”

Upon reaching his fifth consecutive gold medal, he’s asked what he thinks the next season will bring, but we see Viktor’s expression is pensive. His flight to the top is starting to level out; and it appears that he’s not sure what to do with his career; what more can Viktor accomplish after that? When you’re winning consecutive back to back competitions and winning by huge margins, is it really considered competition anymore?  At this point, Viktor is probably questioning his motives for skating, and is looking for the next step.

When you’ve reached the peak of your career, and have already accomplished so much that you’re actually the person that’s been “raising the bar” and you’re the example that’s been set for others to aspire to, where do you go from there? When you stop and realize that there’s something missing from your life outside of your career, you start to question your motives. What’s next?  That’s when you realize something has to be done. Something has to change in order for there to be progress, and that goes for anyone that wants to change for the better. 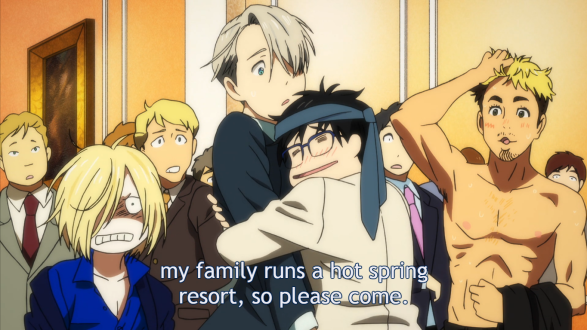 We were led to believe that the Catalyst for change is the YouTube video of Yuuri skating to Viktor’s “Close to Me” Program, but we later find out at the end of the season, that Viktor and Yuuri had previously met at the banquet – Yuuri just has no recollection of the said meeting.  In a flashback scene we see a very outgoing Yuuri whose actions captivate Viktor’s attention and curiosity when he’s asked to be his coach. To Viktor it was an unforgettable chance meeting.

Viktor takes two leaps of faiths; one with his professional life and second his personal life. It took a literal flight out from Russia to Japan for this flight to begin; It’s both a literal and symbolic flight. In order to change, you must confront yourself with the uncomfortable to move forward. Challenge yourself. For Viktor to be able to drop everything and take a chance on something with no contingency plan takes an incredible amount of courage, and it’s not something just anyone can do. It takes someone with a high level of confidence to be able to follow through with a plan like that. However, we all have that capability in ourselves. This isn’t something that we should tell ourselves we could never do, because anybody can.  It’s really up to us to make these changes and how far we’re willing to push ourselves to be better.

First, let’s look at the his leap of faith as a skater. Viktor has no prior coaching experience but he agrees to be Yuuri’s and choreography both Yuri and Yurio’s respective programs. He’s brilliant at it, but he often struggles with what a coach should do, especially when the student is rebellious. Looking at Viktor’s past, we saw that he was a high-level competitor who was used to winning alone, but with the help of Yuri and his leap of faith to take a break from his life on the ice and into coaching that changed.

From the sidelines Viktor was re-invigorated by the sport as he watched his former competitors do better than they ever had before. On top of that, both Yuri and Yurio broke two of his world records. Having to take a step back and witness from another point of view encouraged Viktor to reassess as well as re-align his vision of ice skating. He wasn’t at the top anymore, his crown was going to be taken; that threat that had never been there finally showed up. He realized that he needed to compete, and that he wanted to compete, especially now that there were skaters out there that would be able to really give Viktor a run for his money. This was what he needed to rid of the stagnation that he had been feeling just a season ago, and Yuri helped him realize that there was still yet another chapter for him to write in his skating career. 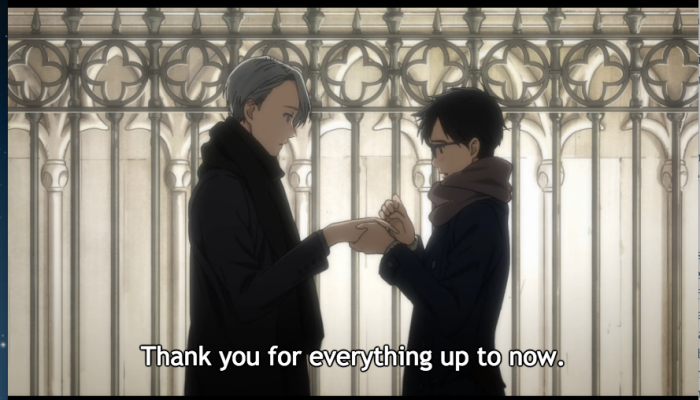 His second leap of faith, probably took him by surprise too. If you think about what happened at the banquet, followed by the viral YouTube video, Viktor really took a blind leap of faith in love. He only knew Yuuri was a skater, and that he had been doing poorly and was on the brink of retirement till he came along. Other than that, he had never really spoken to Yuri, and they knew nothing about one another. Viktor left his life behind in Russia on the off-chance that something could blossom between him and Yuri; and blossomed it did. Viktor was drawn to Yuri because he was always full of surprises both on and off the ice as well and this is what caused Viktor to be fascinated by Yuri and influenced by him as well. He also says, that Yuri’s life and love opened up a brand new world he never knew existed. Their relationship is one that allowed one another to give and take while pushing each other in the best direction.

Viktor’s leap of faith off and on the ice both stemmed from the fact that he was feeling stagnant. He felt like was something missing; his career was about to hit its peak and possibly a plateau. In order to get a fresh perspective on things, usually one takes a step-back, a break, just to reassess their goals, ambitions, and plan out their next step. However, Viktor doesn’t do that, he does the unexplainable and flies out with all his stuff to Japan in search of something he’s felt was missing from his life.

These are reasons why Viktor is inspiring as a character. To take such bold life choices in order to seek out what’s missing and in the end having everything fall into place. Re-igniting his desire to compete, and experiencing a new view on life and love with another person. He does these things for himself and without regard for what other people think, despite his position in the ice skating world; he chose for himself and as the OWLS motto goes, he was free to be him.

In order for one to take flight in search of new dreams and aspirations one has to step outside of their comfort zone in order to succeed. But, never lose sight of who you are in the process, stay true to yourself! So, take a step outside of your comfort zone, take the plunge, explore the unknown and tap into your unlimited potential with confidence just like Viktor did. You never know what’s waiting for you on the other side!

That just about ends my stop on the blog tour!! Thanks for reading my first contribution to OWLS, I hope you enjoyed it! This ended up being a lot longer than I had anticipated; in fact I think this is the longest post I’ve written!! Please check out Takuto’s (Takuto’s Anime Cafe) stop on Monday, February 27, as the final stop of the ‘Flight’ themed blog tour for Feb.