I haven’t had as much time to really watch a lot this past week, but I at least caught up with the ones I’m watching this season. Anyways, here’s a recap of the shows I’ve watched this week: 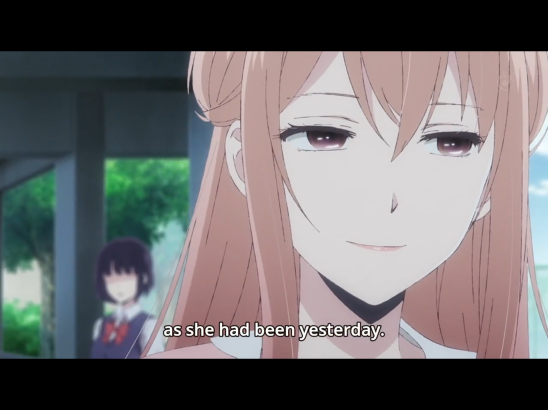 This week’s episode was filled with lots of dark and twisted moments. I’m actually mindblown by the music teacher. Her sweet calm friendly demeanor is clearly a facade. That last scene I think shows us a glimpse of her conniving personality as she and Hanabi have their semi-confrontation. Her eyes half closed with a smirk indicating something like ‘ah, I’ve been caught..time to turn the tables in this situation.’ I think she knows who’s important to Hanabi and may use that as leverage to keep her secret about that guy she was with the night before. I was also shocked that Mugi was completely blind; no maybe he’s completely in denial about what his secret love is doing with that ex-student of hers. It could’ve been him! I like the conflict that Hanabi is experiencing; she sees the mirror image of herself in Ecchan. As much as she looks down upon those who take interest in her when she has no interest in them she’s slowly seeing she’s exactly the same when it comes it her crush. She starts to see that Mugi and her really aren’t the same, which leads me to that scene of them in his room. I’m slightly confused by what transpired when she expressed that she wanted to try to love Mugi. Was that just something she said in passing or did it really hold some meaning?  From Mugi’s perspective I actually felt bad for the guy. It seems his experiences with girls that weren’t romantic partners but more physical partners have just practically used him. I found that scene of him saying he was a toy as his lover and him go their separate ways to be quite powerful of an image as he’s depicted alone and left behind and that transitions to Hana; the newest person to treat him like a toy as she uses his body to experiment since she has never done anything physical with a boy. It was an incredibly interesting episode! My attention has been caught by this and I’m looking forward to next weeks events. 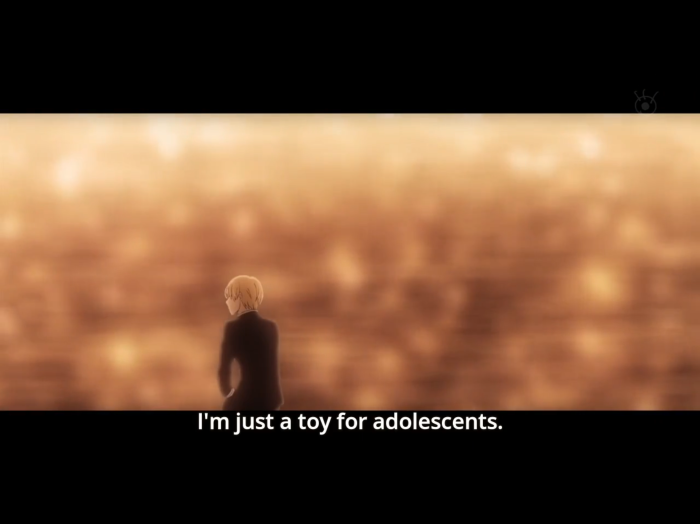 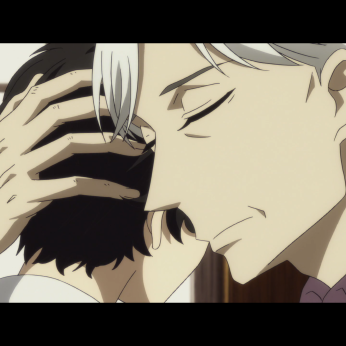 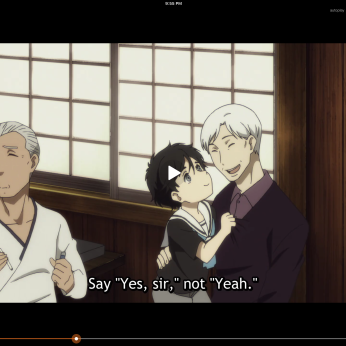 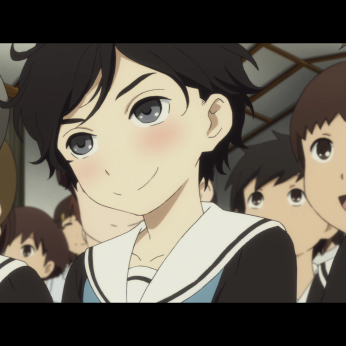 First off, how adorable is Konatsu’s son?? And what’s this?! Kikuhiko is smiling when he’s with this little boy! I feel like this little boy is thawing out Kikuhikos frozen heart. I would like to see another side of him! This little boy is just like his grandfather Sukeroku. He’s charming, charismatic, and great at Rakugo! Future genius in the making? If Kikuhiko would take him under his wing he’d be a great performer. Konatsu finally got to do Rakugo in front of an audience but due to her being a woman, she won’t pursue it. I know it’s a male dominated profession, but with modern times fast approaching in their timeline, it would be radical for her to pursue such a dream, but I think she’d do well and bring even more attention back to the dying art. I know Kikuhiko wants it to die out with him but with so many people willing to pursue the dream that he and Sukeroku had; he should budge. I know Konatsu hates Kikuhiko, but I wonder if she also doesn’t do the Rakugo out of respect to him and his wishes of her not performing or if she just doesn’t want to get on his bad side.

I’m a week behind on this one.. so this write-up is about episode 3. There’s still a lot of intrigue going on with this one. I don’t have too mny thoughts on this episode in particular. All the attention is on Jean, but he doesn’t know why until one of the 5 tell him he’s come under suspicion as to him being the one who’s involved with the coup d’etat Seems like there could be a lot of motives for Grossular and the named prince to want the coup d’etat to happen. But I’m still looking for anything that stands out. We’ll see what happens next week.

Very little action in this episode; the conflict from last week is semi-resolved as we find out who the traitor is and some of the reasoning behind it.  However, I found the confrontation between Bon and Rin to be a bit forced. I get that Rin was triggered by Bon’s fight with his father; but per usual Rin flew off the handle with his flames and keeping his emotions in check. I get that he’s concerned for their relationship; but you can’t forve people to make up even if it’s for their own good and to prevent them from future heartache.  The season over all is off to a slow-start, I hope it picks up a bit in the next few episodes. 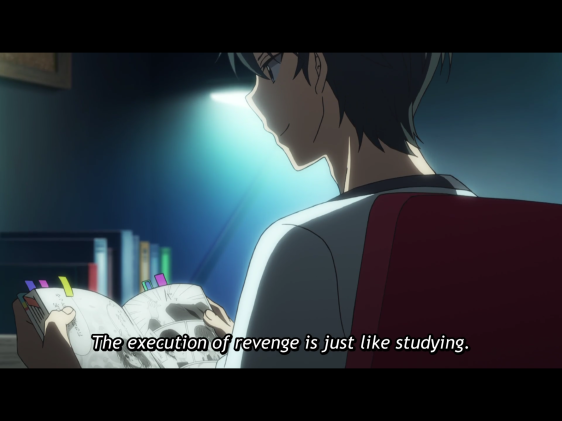 This shows’ plot gets more and more ridiculous and I am loving the silliness of it. I mean Masamune is learning how to exact his revenge via shoujo manga. Priceless. And a new love interest is introduced. Of course it wouldn’t be easy for Masamune to get Adagaki so easily and this early into the plot. Love triangle seems to be a theme this season!

I’ve come to the conclusion that I really really dislike Tama-chan. Honestly, I feel the initial appeal I had for this so how starting to wear thin. The story is a flat one-noted plot. The blushing faces of Tama-chan and Yuu gets old really fast as well as their awkward moments. I wish she’d flat out just say she’s in love with him but of course there’s no real conflict if she’d say it upfront. It does have its cute moments and I like the music, but other than that the show is waning in terms of interest. But knowing me; the ani-masochist in me isn’t going to drop this show.

Haru is as dense as ever to realize his own feelings for Ren. I never realized how slow Haru was in the manga, it’s a lot different seeing this story animated. Is he really that dense or is this some kind of overused trope.  I’m starting to pick up a bit more of the nuances since I couldn’t really tell by reading the manga.  Ah, a new character makes an appearance! And now I’m kinda reminded that I didn’t really like this guy to begin with. I think the more annoying characters in this story are about to appear. And don’t get me wrong I really like this manga, but I don’t know why the adaptation really irks me. 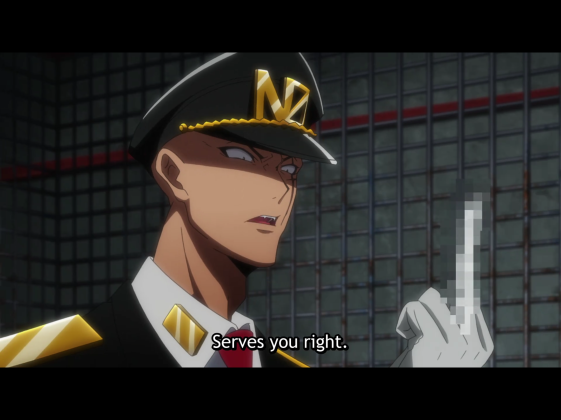 Nanbaka is pure entertainment to me. The flashy colors and the over the top character designs. My favorite is actually the least conspicuous of the cast: Sugoroku Hajime. He’s a bit of a brute, bald and has a scar on his face. I mainly like him because of his brutish personality and his foul mouth. He’s the strongest in the prison and commands respect; but he cowers around the warden because she’s scary as hell. Not much really going on in this episode except that Hajime and the inmates are investigating what caused a guard and an inmate to behave so violently. I still can’t tell who’s at the bottom of this, and I don’t see it being resolved in the next episode either. Okay, so the architectural style is starting to grow on me and can foresee this being apart of Fantasy Friday sometime soon.

*Authors note: Didn’t get to watch these this week; but will eventually catch up!*