2016 has come to a close, and it dawned on me that this is the first full year I committed to watching anime consistently! I was off and on before, but I would say fall 2015 till now has been the most active I’ve been concerning anime plus my blog. So what better way to wrap up the year with a “Best of 2016”, much like lethargicramblings and crunchyroll.com‘s sites which inspired this post. I’ll probabably be borrowing the same topics from both and some of my own – so it’ll be a mixed bag.

A few of the rules: 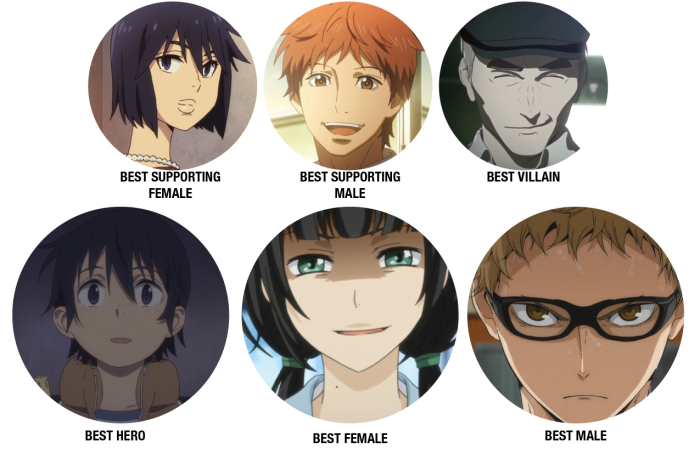 Best Supporting Female
Fujinuma Sachiko, Satoru’s mom in Erased. I mean she’s gotta be the coolest mom ever in the realm of anime. At first she didn’t seem to be a super likeable character, but as the show went on it became clear she was a super mom.

Best Supporting Male
Suwa, you da real MVP. Seriously though. Suwa’s character in Orange was beyond selfless. I was rooting for this guy because he gave up the possibility of his future to save a friend and gave up on the girl he loved for said friend. Orange didn’t always sit well with me, but one thing that kept me positive was Suwa’s role.

Best Villain
Sato, a.k.a. The Hat from Ajin. This guy is crazy. At first I thought he had a real agenda for Ajin’s as he plotted and executed his plans against the Japanese government; but alas, he was all about chaos and destruction. I won’t say much else because I don’t want to be a spoiler.

Best Hero
Satoru Fujinuma, Erased. Have you ever wanted to go back in time and right a wrong? Or thought about living a life without regrets? I love how fearless Satoru is when he’s transported back in time. I get it he’s 27 inside a 10 year old body, but still it takes a lot of courage for a “child” to go out there and try to save all his classmates from disappearing in the future.

Best Female
Hishiro Chizuru, ReLife. Her social awkwardness and inability to smile makes her the best female of the year. Chizuru is in the process of re-learning how to make friends as she had totally given up before entering the ReLife program. I would love to see another season of this – if not, then the manga it is.

Best Male
Kei Tsukishima. I’ve said it before, and I won’t hesitate to say it again, Haikyuu!! Season 3 was Tsukki’s season. I’m biased, but I thought Kei took best male character development for having his “moment”; he played an absolutely crucial role this season in terms of blocking and the overall endgame that would cause Shiratorizawa to unravel.

Runner up: Yuri Katsuki. Yuri is me; zero confidence and indecisive. But his growth in Yuri!!! on Ice was phenomenal. I already gushed about his development in my review, so I’ll try not to reiterate myself.

Naruse Kakeru, Orange. The last time I sobbed and ugly-cried this hard was Your Lie in April. I’m just going to say that all of episode 12 in it’s entirety had me feeling that way (especially since i binge watched the last half). Seeing the entire story from Kakeru’s point of view leading up to his death as he dealt with the death of his mom as he plunged deeper and deeper in depression was impactful. 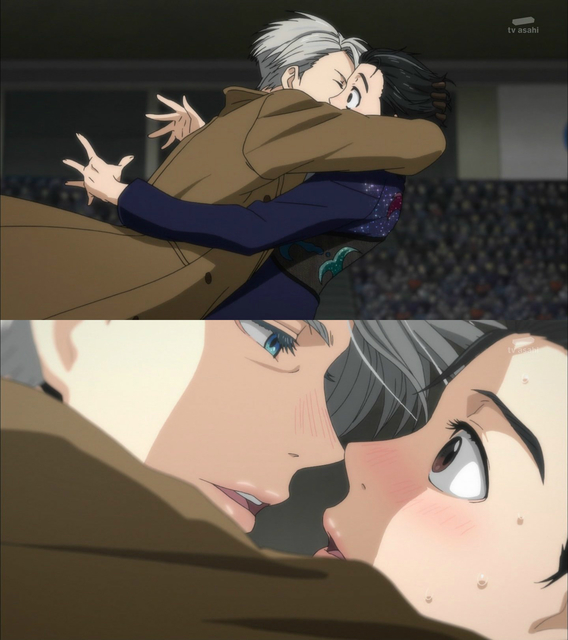 Viktor & Yuri’s implied “Kiss”. I’m choosing this because this is a pivotal point in Yuri’s skating. He was incredibly relaxed for once and we can see his confidence in himself slowly building as he decides to change jump elements on the fly in hopes to surprise Viktor. It’s also heartwarming as Viktor watches on the sides with his facial expressions as he shakes off Yuri’s missteps, and his face in complete shock as Yuri surprises him with that last quadruple flip instead of loop. The only reaction he can think of to surprise Yuri back is that “kiss”.

Close-Call: Viktor & Yuri’s Ring Exchange. I can’t think of a better end to this year’s anime than seeing these two characters excahnge rings in front of a cathedral. Maybe I’m still on cloud 9 from the Yuri!!! on Ice hype, but I thought this was the ultimate heartwarming as they make promises to one another.

Gide VS. Odasaku, Bungou Stray Dogs Season 2. Gide was able to get Odasaku to veer off his non-killing path by using unconventional methods. However, I pulled this specific fight because both Gide and Odasaku have the same ability in which they can see a few seconds into the future therefore allowing them to change course of action when needed to. This essentially boils down to who’s better off in physicality and fighting skills. It was an incredible choreographed scene with lots of slow-motion shots amidst the action – very much like how I feel in “wait” mode in FFXV.

Action
Bungou Stray Dogs. I think both seasons did great jobs with the action genre. The mix of abilities and actualy hand combat was done really well.

Psychological
Erased. I would watch each episode repeatedly trying to figure out who the killer was. I found that there was a lot of symbolism hidden in this one as well.  I resorted to the manga to fulfill that curiousity of finding out the killer before the show even ended. The manga ended completely different than that of the anime, which kind of made me sad but still  Erased was one of my favorites ot the year.

Drama
Joker Game. This show had a few flaws in it, but I couldn’t overlook the overall idea of the spy agency and each character story had its strengths; my only gripe was that there wasn’t an overarching story that tied all the characters together outside of the fact they trained together at D-agency.

Fantasy
Drifters. There wasn’t a lot of fantasy this year that had me hooked. So I’m going to give this one to Drifers because of it’s unique art style and interpretation of historical characters.

Sports
Haikyuu!! I mean, this has to be a given. There was quite a bit of sports anime’s this year, and I’ve managed to watch most if not all of them and Haikyuu was still a cut above the rest. Althought it was just ONE match in season 3, I thought that maybe they were dragging it out. However, I was wrong. It didn’t feel too drawn out or overexaggerated to progress the story line along.

Comedy
Sakamoto Desu Ga? I found myself drawn to this show weekly purely because of how ridiculously silly some of the situations were. Sakamoto definitely had it’s moments of side splitting hilarity.

Slice of Life
Tanaka-Kun is always listless. I’m not usually drawn into slice of life’s but this one had me intrigued. From the very first episode I was hooked; Tanaka-kun’s dedication to his lifestyle choice was so entertaining; especially when you have a best friend like Oota who basically supports you in everything related to your listlessness and ends up carrying you around like a body pillow. Tanaka was super enjoyable and an anime I tend to recommend for easy watching.

Best OST
Yuri!! on Ice. I thought all the characters had really great tracks that they skated to, and it’s actually a playlist on spotify that I listen to at least daily.

“Yuri on Ice”, because as my review on the anime said, there’s just something about this piano piece’s melody that has me completely hooked.

Hikari Are, Burnout Sydromes. There were a lot of great OP’s this year but Haikyuu’s OPs are always top notch. Both catchy and hype-inducing and great animation sequences. I also liked the use of symbolism in this particular one – though its a bit heavy handed in showing it.

Runner ups: “History Maker” Dean Fujioka, Yuri!!! on Ice. I found myself humming this to work almost everyday of the fall season.

Namae wo Yobu yo (名前を呼ぶよ)  by Luck Life. The ED of season 1’s Bungou Stray Dogs is something thats been on my playlist all year. It’s really catchy, and I always find myself humming along to it. Finally saw the lyrics translated recently and started to love the song even more. I’ve been hooked on Luck Life’s music ever since.

Best Art/Animation
Mob Psycho 100. I may have mentioned it in my 30 Day Anime Challenge, but I found the evolution of the artwork in Mob Psycho over the course of the series as something of note. I didn’t mind it at all, I actually quite enjoyed it. My favorite time was to see how expressive Mob’s aura would get when he would reach his 100%.

Best Short Form
To Be Hero. This was the year I was introduced to short form anime’s. I watched a few but I think I liked To Be Hero  the most as it actually held a storyline compared to the others I’ve seen (Ojisan to Marshmallow, Oshiete! Galko-chan, Fundanshi koukou seikatsu). Art style is also of a different style; much similar to Mob Psycho 100 if not a tiny bit cruder.

Best Original
Kiznaiver.  I thought this anime did well in getting us to care about the characters and re-iterate the idea of connecting through pain throughout the series. I think I shed a tear or two for a few of the characters. I think Chidori especially, because I’ve been where she’s been, an unrequited love that hurts because they’re your best friend. The colorful palettes expressed the different personalities of each character really well and they were all over the board it was interesting to see them connect to one another on different levels.

Surprise Hit
Shouwa Genrouku Rakugo Shinju. As someone that loves anything to do with history, I was kind of skeptical about this one at first. But I’m glad I decided to give it a shot. I was floored by the Rakugo performances and the experessiveness it takes to be a performer. I especially enjoyed watching Kikuhiko’s progression as a rakugo performer. But that love story though – what a love triangle. This show was way more than I had expected; all the characters and their relationships were incredibly complicated due to each characters nature.

ANIME OF THE YEAR
Mob Psycho 100. I know, I know. Believe me, it was a tough call between Mob and Yuri. But I had to go with Mob, because as much as I love Yuri, Mob was a runaway hit for me from the summer.  It encompassed a variety of things that landed it in the top spot this year. Mob’s determination to better himself without relying on his ability was well as Mob’s desire to not to fit in to be a cool kid really resonated with me. His self-acceptance was really the core of this and stood out among all the others. On top of that you have a unique art style and some epic fight scenes throughout the series that kept me tuning in every week.

That wraps up my 2016! Do you guys agree or disagree with some of my choices? I’d be curious to see people’s thoughts.  I ran out of steam trying to write up some of the stuff due to my cold so my reasoning’s aren’t entirely clear so appologies for that. Thanks for reading through this long winded post! 🙂