This will be a huge spoiler to those that haven’t seen it, so I’ll put a break after this brief intro. So read at your own risk. But for me the saddest anime scene comes from Your Lie in April.

As someone that’s grown up to love classical music, played the piano, and been in band for majority of my younger years; I’ve always felt that music had the ability to evoke our emotions and stir up a part of our souls. Musically, the pieces in Your Lie in April and the interpretive stances these musicians took to express these pieces were done incredibly well. Specifically with my saddest anime scene in Your Lie in April which is found in the first half of the final episode. They stretched out Kousei’s final performance in this half; and the song that he’s chosen to play was Chopin’s Ballade No. 1 in G Minor op. 23.

There are several things that really made an impact on me. First the music. Chopin’s Ballade’s don’t follow a specific narrative as the piece progresses. His intent was for listener’s to follow their own narration in the music. His ballade’s are considered to be his finest creations and the most representative of romantic music. I personally found that there were three movements within this piece as per what the animation suggests. The first is in the beginning where Kousei is having a monologue about his past and what he’s realized what music has meant to him. The second is focused on his relationship with Kaori being an important factor in his life, as this segment includes the duet with the violin; this section builds up to the climax of what I found to be the third movement. Third, is realizing that Kaori is gone and this is Kousei’s emotional goodbye in accepting it and this was probably the best way for him to communicate the pain he’s feeling. 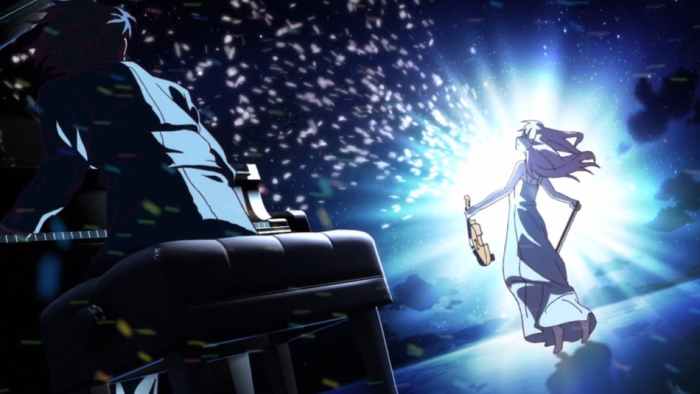 This became more of an analysis but all of these things combined created the saddest anime scene for me in a span of 10 minutes. The ramp-up of the music to that final scene of Kaori disappearing and Kousei saying goodbye was able to create an emotional ending to this show. The first time I saw this scene I was a pure sobbing mess. No matter how many times I see this scene I can’t help but tear up. It’s just done so beautifully. Although this show may not be a masterpiece overall, I think this specific scene is a masterpiece in it’s own right. It’s pure beauty and emotion in motion.