I thought picking a favorite MALE character was hard. Picking a FEMALE is even harder! There aren’t many on my list to begin with so I’ve decided to go with whom has really stood out to me as of late and is my current favorite: Erza Scarlet from Fairy Tail. The others on my list: Mikasa Ackerman, Sailor Venus, and Utena Tenjou; and Rin Tohsaka (not pictured). I’ve been pretty picky about the ladies of anime. But one thing’s for sure, I like independent, headstrong leaders that are bad-asses. 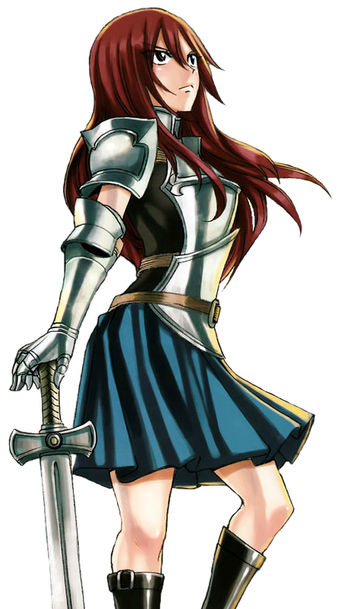 Erza’s story revolves around her role and involvment in the magic guild ‘Fairy Tail’ and as every member in the guild has, she also comes from a troubled past. As a child Erza was caught and enslaved by a cult. In an attempt to escape with her friends she decided to take shoulder the blame – even though she was not the one who orchestrated it. The cult came to the conclusion that it she was the ringleader of the group and was taken away and tortured till the brink of death and eventually loses her right eye as a result. She was rescued by her friend, and future love interest, Jellal. He was also the one that gave Erza her surname Scarlet since she had none when they met. He chose it so that none of them would forget since it was the color of her hair. I would talk about Jellal more, but I want to save that for another time. Erza is able to escape from the cult due to Jellal’s help but is forced to leave him and the rest of her friends behind. From there, she made her way to Fairy Tail as another slave that took care of her often talked about the magic guild.

There are a couple of things that I love about Erza – I actually use her name as my character’s name in any Otome game (MysticMessenger, Amnesia: Memories, and Hakuoki). It’s a really pretty name. But aside from that, I find Erza to be incredibly beautiful both inside and out and ultimately the coolest girl ever. She cares deeply for her guildmates and will risk life and limb for them; but that feeling is mutual among everyone in the guild. When you’re not on Erza’s bad side she can actually be kind, bright and very warm. She’s known to fight for whats right and she usually tries to save people whenever she can. 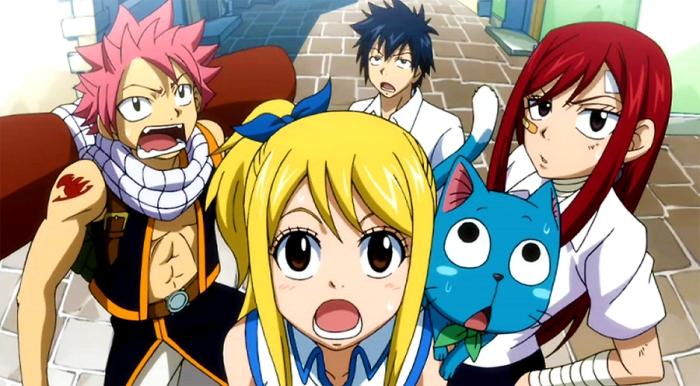 Erza has a huge armor collection.  She usually wears a specific armor, the “heart kreuz”, as her everyday outfit. People might view some of her outfits and armor as part of the  “fanservice” but I think it speaks volumes about her confidence as a character. She’s one of the strongest wizards in her guild, and many of them have a high level of respect and admiration for her – especially Gray and Natsu, whom essentially grew up with her. Alongside this tough exterior she projects she exudes a high level of sex appeal; while most women will hide that, Erza celebrates it.  The armor that she wears is not just to physically protect her, but also serves as a symbol for her emotional state.   Without armor on she feels uncomfortable and vulnerable. This resonates with me because I feel like I’ve had to symbolically put armor over my heart to protect myself because like Erza sometimes I care too much and end up losing too much.

My last point in choosing Erza as my favorite female character ever is her magic ability. Her “requip” magic is incredible. She is able to swap out any outfit, armor or weapon at will. It just requips with her just thinking it. My favorite piece of armor and weapon of hers is her “Heaven’s Wheel Armor” – her armor essentially looks like angel wings, and this armor allows her to summon over 200 swords at once.

I think that about does it for my favorite female character. Watching Erza on Fairy Tail is a blast – especially her really girly moments when she’s enjoying her sweets more than anything, and is devastated when she’s deprived of it (like above).  Although she is a super serious character she can also be quite the dork. She is literally me when it comes to cake and other sweets!