Favorite male character ever. Hmm, this ones a little tough because I’m usually re-shuffling my Top 5 male protagonists. However, there is ONE that has never really been de-throned as my absolute favorite. And from my featured image, it should be fairly clear that it’s Vash the Stampede from Trigun. You can see the rest of the contenders hiding in the shadows…but if you weren’t sure who they were: Shinya Kogami, Makoto Tachibana, Kageyama Tobio and Archer from Fate/Stay Night: Unlimited Blade Works.

The Trigun series is probably my first “action” anime that I fell in love with. The story and the art itself had drawn me in due to the character designs (and the character’s personalities themselves!) as well as the cities that they occupy, and the space ships! What else more do I need to say?

My love for Vash has really grown in multiple phases: from mere observations in the show, to actual research on theories and analysis of his character. My absolute favorite thing about him is his ability to be silly and be a bad ass all at once – such opposite ends of the spectrum and he encompasses both so easily. His character goes through some radical development changes in just 26 episodes. There’s something endearing about his silliness and his “peace and love” motto in the first arc of the series. But in the second arc we see how extremely flawed and troubled he is as he struggles with some internal issues that has formed his ideals. The third arc is where he has to confront those issues head on and how he deals with his ideals becoming shattered and how he forges his own path towards the future.

Vash’s entire being is a walking contradiction. In the world of “Gunsmoke” he’s the best gunslinger and is on the run for having destroyed two cities completely  which left him nicknamed the “humanoid typhoon” and labeled as “a natural disaster”. The bounty on his head is 60 billion double dollars so tons of bounty hunters are after him as well as a pair of insurance policy agents that follow Vash around reporting the damage that occurs. Despite his wicked reputation to the world; he’s quite the opposite. He’s a goofball that is a pacifist. He’s the best gunsman in the world and is quite modest about it. He’s never shot to kill and he refuses to kill. He’s also quite passive aggressive and tries to avoid confrontation if possible. But when push come to shove he won’t back down. Vash is the type to take the burden of many and make it his own. But on top of that his true character is so charismatic that he can’t help but touch the lives of the many people he encounters as he traverses the planet.

We see these different sides of Vash through the eyes of the insurance agents (Milly & Meryl) as they begin to realize that he’s nothing like the reputation everyone has given him. Vash just has unbelievable bad luck that follows him from town to town as outlaws and bounty hunters try to catch him thus putting innocent civilian lives on the line. When he’s confronted with this he uses his bad persona to his advantage in these situations to protect the civilians and in the end save everyone. 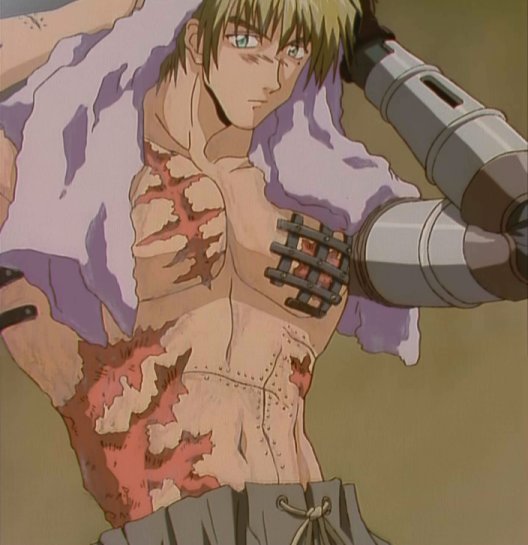 His happy-go-lucky attitude is clearly a façade to hide the internal and physical pain he’s enduring. I mean…the scars on his body and metal patches that barely hold him together? That scene alone had me completely disturbed yet enthralled with his character.  Seeing him in this state was if he was atoning for the sins his brother has committed – or maybe his own sins for having unwillingly destroyed two towns on Gunsmoke. He also usually wears his sunglasses to mask the transition from his happy go lucky self to his alternate more serious persona when he encounters an injustice that needs to be corrected. Vash is also deeply philosophical despite his actions, he ends each  episode in a soliloquy that describes the upcoming episode. He’s just such a layered character and I absolutely love him for it. Ahhh, I could go on and on about him, but I won’t. Maybe I can revisit a blog about him in the future!

This show still has a million plot holes — where did Vash and Knives come from? Where did these “plants” come from? What purpose where their powers for? How are the beings inside each “plant” really related to them? I could go on and on, but it doesn’t take away from this being one of my favorites. As of right now, Trigun is the only manga I own and am collecting.

Who are your guys’ favorite male characters? And Why?
Till next time!